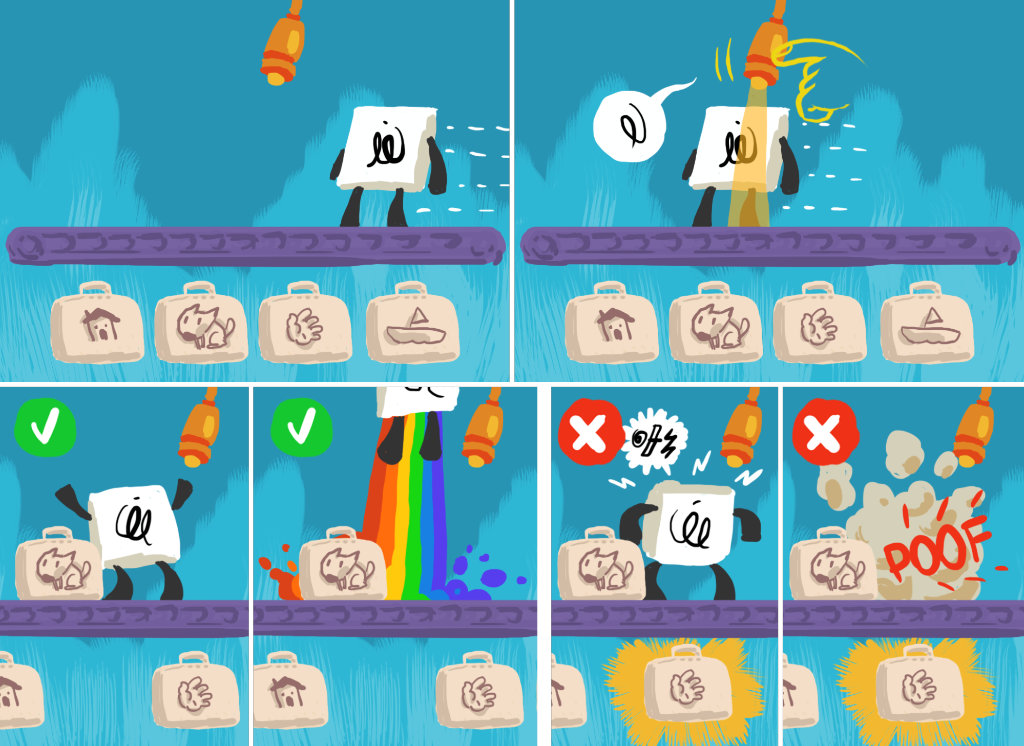 Play: Find and give the right luggage to the LL.

In the middle of the screen we have a conveyor belt moving left to right, over which an LL (with a word) is standing idle while being transported (the idea is that she’s passing the checkpoint to fly somewhere, and we need to give her back her correct luggage).

Sometimes Antura jumps in from the right side and stays there jumping in position for a while (if an LL had already reached the right side, she’s bumped and falls out - but no time is lost). After N seconds, he runs like a bull towards the opposite side and throws away all the LLs present (again, no time is lost, only LLs).

While Antura is jumping on place, the player can interact with the scanner and pass it repeatedly over him to scare him away, so he won’t charge the LLs.

At each round completion a new set of suitcase and a new LL will appear. The timer will be the same for all rounds.

The LL will grab the suitcase (if technically feasible, otherwise the suitcase will just stay next to the LL), make a happy jump, and fly upwards (and off screen) followed by a rainbow trail.

Condition: timer elapses (endgame), wrong suitcase is given, or LL exits the screen.

The correct suitcase is immediately evidenced. The LL will utter her word (even if she is off-screen), and then, if she didn’t exit already, disappears with a grumpy POOF (while uttering some disgruntled gibberish).

Multiple words Each round has multiple words forming a sentence, where all suitcases are related to them and the player needs to combine all of them with the correct LL (which must all be visible). Failing one suitcase will jump to the next round (new set of LLs and suitcases).