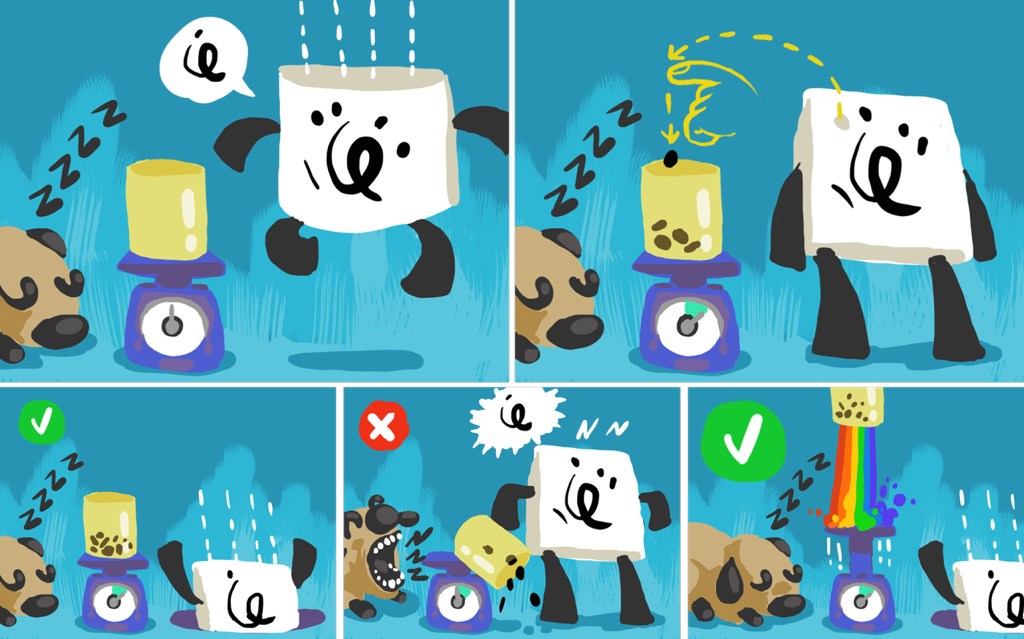 Pedagogical: Teach accent and dot positions related to letter and sounds. This game is pedagogically complementary to Dancing Dots. Play: Fill the scale with dots/diacritics (DDs) to reach the heaviest weight.

On the right side of the screen, an LL with a letter falls/jumps-in from the top, saying her letter. The LL has a shitload of DDs positioned around the letter. The player will have to remove all the wrong DDs and throw them in a glass vase (which is over a scale). The aim is to make the vase as heavy as possible.

Antura will be sleeping on the side of the vase, and will bark in case of error.

IMPORTANT: the max weight reached (per game) is always preserved in memory (shown as a colored circle on the scale), so that the final star score will reflect that max weight, and not the one at the endgame. This way, if the player loses all his DDs right before the timer elapses, the game won’t be unfair and he will still get a decent score.

Antura is sleeping on the side of the vase. In case of error, he will wake up and bark, tipping the vase. Then he will go back to sleep.

The game will end when the game timer elapses.

If an LL is present, the hatch will open and she will fall inside. The camera focuses on the vase. The scale pushes it upwards with a strong bounce. The vase disappears followed by a rainbow trail.

Condition: minimum weight not met when game timer elapses. If an LL is present, the hatch will open and she will fall inside. The camera focuses on the vase, which tips on the side and falls, while Antura howls.